Boy did I need the Kleenex after watching this clip of Michael falling apart during his reunion with Fiona  from Thursday's episode of "Burn Notice.  I have really enjoyed the past two episodes, which have been less fast-paced action and explosion and more heart and emotion.


At the end of the last season, we saw Fiona turn herself in to the authorities in the wake of a bombing meant to take out o their mutual enemy Larry(Tim Matheson). But, unaware that Michael's seriously deranged and dangerous nemesis Anson(Jere Burns) had planted extra explosives,  that not only killed Larry but two innocent security officers.

To say the least Michal is not taking Fiona's incarceration very well.as you can see in the above clip.
Posted by MISS TV GIRL at Tuesday, June 26, 2012 No comments:

"SUITS" SEASON 2 PREMIERE: THE SECRET IS OUT

Last night we saw the return of Suits and boy did it not disappoint.  When you look back at Season 1 the biggest question the show had you asking was how long could Mike (Patrick J. Adams) and Harvey (Gabriel Macht) keep their secret from Jessica (Gina Torres), now I must admit I had no idea we would get the answer so soon in the series run. Suits opened its second season with a dinner date between Jessica and Mike, and the cat and mouse game of does she or doesn’t she know began.  Harvey tried to reassure a beyond paranoid Mike that the dinner invite was actually an honor.  All of the most successful Pearson Hardman partners got the same treatment as first years.  To be honest, Harvey had me convinced, I was swearing at the television about how the previews were so misleading, but boy was Harvey and I wrong.

Harvey may have calmed Mike’s nerves, but he knows Jessica well enough to know when she is up to something.  So, when she returns from dinner with Mike, Harvey is waiting with questions. Jessica’s reveal was awesome, just as Harvey is feeling all confident and reassured that she doesn’t know anything, she stops him dead in his tracks and in her words “He may have checked out clean, but I know that kid is full shit, because there may be a record of him graduating from Harvard law, but there is no record of him graduating from any college anywhere on the face of earth” BAM!!!!!!!!!!!!!! So, Harvey is told to fire Mike, which we all know won’t and didn’t happen.  I love how Harvey can’t admit to himself that he really cares about Mike.

By the way Trevor the so-called best friend, who outed Mike to Jessica, is a despicable human being.  Now, don’t get me wrong, Mike dating Jenny and lying about it was pretty lame, but I feel that Trevor owed it him after all of the times Mike literally saved his ass to hear his side of the story.

Suits looks like it is a off to a great start with this season 2 opener and I can’t wait see what Suits has in store for the rest of the season..

"PRETTY LITTLE LIARS": JENNA WE CAN SEE YOU 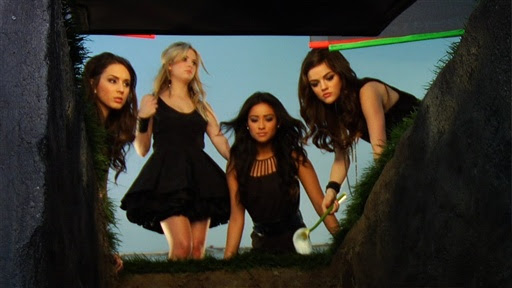 Last week we saw the return of Pretty Little Liars after a wonderful finale that saw the death of Emily’s girlfriend Maya and revelation of Mona as A.

This week’s episode we saw Emily having yet again another breakdown, now don't get me wrong I totally understand being upset about Mya’s death, but boy has she been extra annoying these past two episodes. Anyway, Emily notices a necklace in her bag that says “Dead Girls Can’t Smile” and is adorned with teeth and the everyday insanity that is their lives starts. A debate about what to do with the necklace lands it in the toilet. How can four girls fit into one non-handicap stall? Amazing!!!!  As you probably have guessed due to a highly sensitive toilet sensor the necklace is flushed after the ringing of the school bell.

I have to ask myself after the first 10 min. of the episode why am I still watching “Pretty Little Liars” ?  My answer, because it is a guilty pleasure and when it is good, which is about 85% of the times it is really good.  Now back to the episode.  Soon afterwards we see the not so blind Jenna who gives Aria the best line of the night “Is it me or is she blinder than she was last year”.  This leads to the girls going back and forth about rather Jenna is faking it or not.  And as you probably have guessed the girls set a trap for Jenna and of course she takes the bait and now they know her secret.  This reveal gives  Aria the 2nd best line of the night after the girls argue about outing Jenna  “Don't look at me I'm ready to hang a sign Bitch can see”.

I know it's early in the season and my complaints and disappointments may be a little premature, but I kind of feel like I am watching the first season again. Now don't get me wrong I did not think for a moment that we were finish with A , but the nonstop text messaging  from the 1st season has started again and it is enough to make me want to run for the hills. I understand this is A way of showing how she sees all and is everywhere, but I prefer the intimidation by action more so than text messaging.


Emily Maynard finally fully sheds her too perfect image and gets real. I have enjoyed Emily on her season of the Bachelorette much more than when she was one of the girls vying for Brad Womak’s affection on The Bachelor. She was the girl every girl loves to hate on The Bachelor but on her season as The Bachelorette she has stopped being portrayed as little miss perfect and started being real/down-to-earth and actually seems like a cool chick I would want to be friends with. Last night, after telling Kalon she “loved to hear him talk” but to let her finish first, she told him to “get the f*#& out!” after he unapologetically referred to her daughter as “baggage.” I suppose that truth be told, Emily does have some baggage (don’t we all) but she took umbrage with his implication that her daughter was a burden rather than a blessing. Obviously, Kalon was not interested in finding love with Emily and welcoming her and her daughter into his life with open arms. As such, Emily kicked him to the proverbial curb. It was greatly satisfying and a nice change from the last Bachelorette where we all were forced to painfully watch Ashley get made a fool of by Bentley (a name only suitable for a canine). I am sure we have not seen the last of Kalon on reality TV and I hope his butt sees the couch of a shrink as he clearly has some “issues.”

Kalon is not the only wanker among Emily’s suiters. I can hardly stomach looking at Ryan’s face anymore and having to watch Emily kiss him during the Shakespeare play put on during her group date made me gag. I am not sure why the producers of the show feel like they need to do things like offer a lesson in drinking tea or putting on a play. No one watches the show for that kind of crap. We watch the show to see if perhaps there might be love a-brewing. Frankly, I don’t see her settling down with any of these guys.

Last night she had individual dates with Sean and Jef and went on a group date with Ryan, Alejandro, Doug, Chris, Arie, Travis, John (who is this guy, he is never on air) and Kalon. In their individual date, Sean and Emily seemed to have a nice time and Emily really seems smitten by him. There must be more to him than what has been shown so far because I don’t see what she sees. He strikes me as boring and he is self-admittedly picky about women having been on very few dates in the past due to his high standards. He also mentions his faith often. Emily, I smell a judgmental jerk who will probably make you feel bad about yourself. Run. What I have noticed is that Emily seems to want someone who is VERY good looking but also real, sweet, a good provider, a great dad, funny, etc.etc. Someone needs to clue her in that almost never does someone who is exceptionally good looking ever develop the rest of the qualities she wants because they are never forced to.

Next was the group date where the whole “baggage” situation occurred. Other than that, the group date was a snore. Her individual date with Jef. I actually like Jef. He seems genuine and kind. But did any else notice that after his first kiss with Emily she patted him on the shoulder several times. It was not a typical reaction and it makes me think that she sees him as a little brother. I think she probably won’t choose Jef in the end.

During the drinks portion of the Rose Ceremony, Ryan wanted to show Emily that what they have is deep so he gave her a turquoise necklace. Huh? Again, he is just a wanker. I was hoping she would send him home so I don’t have to look at him next week. Emily scolded a few of the guys for not sticking up for her during the whole Kalon situation then ended the night by sending Alejandro the mushroom farmer on his way. Hopefully, she ditches Ryan, Travis, and John next and in that order.

Next week Emily and the fellas go to Croatia. I don’t know much about Croatia so I am excited to learn a little and see what happens in the land of fake TV love. 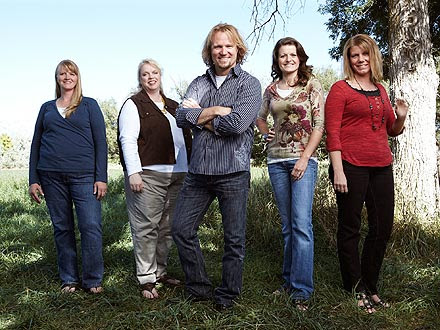 Sister Wives is still my guilty pleasure despite the fact that it has gotten a little boring lately (especially since Christine stopped being jealous of Robyn and is no longer scorned that she is no longer Kody’s favorite wife). Nevertheless, I am still hooked.

Last night Logan, Mariah, Madison, and Hunter travelled back to Utah on their Spring Break to visit family and friends. During a picnic in chilly weather, Logan scolded his siblings who were complaining about the temperature and told them to, “Man the f*%# up.” I myself am a little loose with this word and so this made me giggle a little. Christine was horrified that Logan used such a vulgar word (Really? Your “husband” sleeps with 3 other women and you’re bothered by a teenager dropping one little f-bomb? Can you say “big picture”?) but Janelle won the coolest polygamist award because she says she will ignore his foul language. This coupled with Janelle’s statement last week that she would gladly accept one of her children if they happen to be homosexual has launched Janelle from my least favorite sister wife to a neck-and-neck race with Meri for top lady.

Later during the family business meeting, Robyn shows off her jewelry designs for their new business “My Sister Wives’ Closet.” Her jewelry designs mostly center around playing with ways to meld together the S and W in sister wives. If she wants to make this necklace as a gift then I think that would be a fine idea, but this as an idea for a business to sell to the general public…? I’m not sure anyone else is going to endorse polygamy by wearing her SW creations? I look forward to next Sunday to see what kind of shenanigans those crazy Brown polygs pull.
Posted by MISS TV GIRL at Monday, June 11, 2012 4 comments: