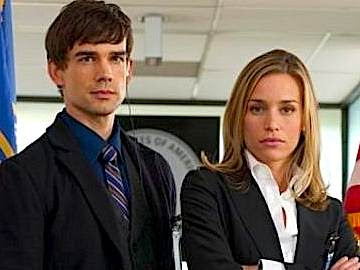 I decided to take the USA spy drama off of my DVR.  Why?  I am just not enjoying the show anymore, and in all honesty I am not sure if I ever did.  I watched the complete 1st season and the three episodes that have aired this season and have come to the conclusion that it is just a complete waste of time. In two words "it's boring "and nothing continues to happen week after week.  After 14 episodes, I don't care about these characters at all. Why? Because the writers haven't done anything in the way of character development to make me care.

I am really upset about this because, I totally love Christopher Gorham and I really like Piper Perabo.  These two were the only reason why I gave the series a chance and continued to watch week after week.
Posted by MISS TV GIRL at Monday, June 27, 2011 No comments:

Pino (Cold Case) will replace Christopher Meloni  who left the show last month after contract negotiations went south.   Giddish(Chase) will fill in for Mariska Hargitay, who's reducing the number of episode"s she's appearing in this season.

I'm very pleased that we have two amazing actors joining the cast," "SVU" creator Dick Wolf says. "I know this combination will give us the opportunity to explore the world of 'SVU' with new eyes."

I am unfamiliar with Giddish's work, but I really enjoyed Pino on "Cold Case", looking forward to next season and seeing how all of these cast changes play out.

Elba stars as John Luther, a detective struggling to cope with his own demons, devastated by the brutal murder of his wife, John Luther returns to policing in a different world for season two
.
His old unit has gone and he's working in the newly created Serious and Serial Unit, headed by former police complaints officer Martin Schenk (Dermot Crowley, Babel, Bleak House). Luther quickly gathers together his team, rescuing his old partner Detective Justin Ripley (Warren Brown, Occupation, Shameless) from uniform. It's not long before they're dealing with their first case. A masked man wanders the streets of London, carrying out ritualistic murders in historic locations, working his way up to one final masterpiece.

I am so excited by this bit of news.  If you missed the first season please find and watch it ASAP.
Posted by MISS TV GIRL at Wednesday, June 22, 2011 No comments:

"The Challenges" formerly know as Real world/Road Rules challenge premieres Wednesday, June 22.  Am I the only one who can't believe that this show still has legs? WOW!!!!!!!  Well moving on, unlike past seasons the 14 male and 14 female  contestants will be paired up with their sworn enemies and from the above clip there will not be a lack of drama.
Posted by MISS TV GIRL at Tuesday, June 21, 2011 No comments:

The fourth season of True Blood starts June 26, but believe it or not I have just started watching the series this month and boy am I enjoying this show.  I can't believe I am 3 seasons behind, especially with all the hype that has surrounded the series since day one.  Not having HBO is not enough of a an excuse, because I have never missed an episode of "Curb Your Enthusiam" and its on HBO. Also, considering my  obsessive affinity for anything that involves vampires, werewolves, witches and  my new favorite shapeshifters.

Please check out the below clip for the 4th season of "True Blood".  I am only on the 1st season, so I have a lot of episodes to watch before the show returns next month.

BEHIND THE SCENES WITH "CURB YOUR ENTHUSIAM" SEASON 8

"Curb Your Enthusiasm" is truly one of my favorite shows and  I am counting down to its July 10 return.
Posted by MISS TV GIRL at Tuesday, June 21, 2011 No comments: Criminal Minds continues to play musical chairs with its cast.  The the successful CBS series has decided to welcome back Paget Brewster and A.J. Cook for season seven as series regulars.  Now this bit of casting news leaves recently promoted to series regular Rachel Nichols out of job.  BUMMER!!  Meanwhile co-star Thomas Gibson still doesn't have a deal, negotiations are ongoing, maybe if his negotiations go the way of Chris Meloni (Law & Oder: SVU), the series can invite Rachel Nichols back.

At this point I don't really care, I have watched "Criminal Minds" from day one and continued to watch even after the very talented Mandy Patinkin left after season two. Six years of doom and gloom is enough, I found myself dreading to watch the series.  Also, I don't know if it is just me, but  the characters have become so depressing and  the cases are so much more violent. Its just not fun tuning in to watch every week.
Posted by MISS TV GIRL at Tuesday, June 07, 2011 No comments:

SNEAK PEEK: "KEEPING UP WITH THE KARDASHIANS" RETURNS SUNDAY, JUNE 12

In season six, the Kardashians put family first in order to spend more quality time together, igniting a whole new adventure when secrets they've been keeping from each other are revealed. The 12-episode, highly anticipated new season is produced by Ryan Seacrest Productions and Bunim/Murray Productions and premieres Sunday, June 12th at 10:00pm ET/PT only on E!

With Kim in love and constantly on the road; Kourtney and Khloé managing their own households in addition to their three DASH boutiques; and Kris managing everyone's careers, the whole family has to make concerted efforts to stay connected. The season kicks off with Kourtney being upset that Kris seems to have forgotten the real meaning of family and has turned the Kardashians into a business. Taking matters into her own hands, Kourtney plans a gathering for the family where the only item on the agenda is having fun. Unfortunately, not everyone got the memo and things quickly go awry.

This season fans will get an inside look at Kim's relationship with new beau New Jersey Nets star Kris Humphries, who Kim thinks is "the one." Kourtney and Khloé divulge they are wary of investing their emotions into Kim's new relationship.

Meanwhile, Kourtney and Scott have finally moved into an amazing new home, and Scott goes up against his girlfriend in a battle to reclaim the key she gave Kris. Scott pushes Kourtney to get it back, but she doesn't want to hurt her mom's feelings. But the tables turn and Kourtney is soon disappointed when she learns that Kris strongly disapproves of her trying to have another baby out of wedlock.

Despite the spats, the family members come together to support each other, and the three older sisters take the younger ones under their protective wings. For starters, Kim takes Kendall to The Big Apple to help jump-start her burgeoning modeling career, but the teen is quickly overwhelmed trying to keep up with her famous sister's work ethic. And when Bruce finds Kendall is using birth control, Khloe jumps in help Bruce have "the birds and the bees talk" with his two youngest daughters. Later, Kris worries she's not aging gracefully and contemplates plastic surgery. Luckily, Bruce is there to encourage her to tackle getting older with the same verve she uses in her business endeavors.

Also this season, the family takes a long overdue vacation to the tropics in honor of Kris and Bruce's 20th wedding anniversary. Away from the red carpets and business meetings, the family is able to have some fun in the sun and share the closeness they had before Kardashian became a household name. But things don't stay so sunny in paradise - when strong personalities come together, cloud bursts are inevitable. Kris Humphries joins Kim on the trip, and his first foray into a Kardashian vacation isn't without its rough patches. Scott finds it difficult to enjoy the celebrations in moderation, and he and Rob finally address the tension that's been simmering between them since Kim's birthday party in Vegas over a year ago.

Labels: Felecia R. Jones KEEPING UP WITH THE KARDASHIANS", MTV

Oscar-nominated actor Laurence Fishburn has decided exit 'CSI' after 2 1/2 seasons , Deadline reports.  Fishburn was originally cast after the original and popular star William Petersen left the very successful series in 2008.  Fishburn will next be seen in Steven Soderbergh's thriller "Contagion"

CSI's other high-profile star, Marg Helgenberger, has decided to return next season for only a few episodes.

The popular series is moving to Wednesday 10pm this fall, after10 1/2 seasons as CBS Thursday anchor.