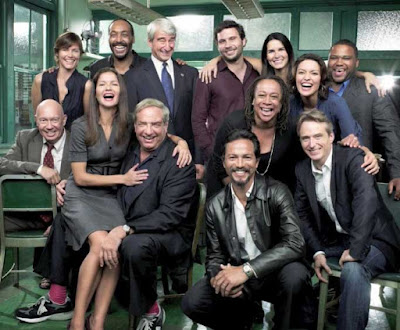 I have great news for "Law & Order" fans. NBC's President of Primetime Entertainment, Angela Bromstad, has vowed to renew it for another year.

The series revolves around NYPD crime investigations and the trials that follow first debuted in September 1990. To the delight of fans the premise has remained the same, however number of cast changes are way to many to count. I personally started watching during the Jesse Martin and Benjamin Bratt years and I have stayed committed to watching every episode ever since.

The current addition of Jeremy Sisto, Anthony Anderson and Linus Roache has been my favorite.

The show has been on the air for 20 seasons now, and a lot of fols including myself thought that this would be the last season. I am happy to have been completely wrong.

With considerable concessions made by Wolf last spring in order to keep the show on the air and with the decline in ratings this season,
cancellation seemed imminent.

So it looks like "Law & Order will surpass "Gunsmoke's" record

Check out the promo below for a sneak peek at the cases you will see once "Law & Order" returns Friday, Jan 15th