"PRETTY LITTLE LIARS": JENNA WE CAN SEE YOU 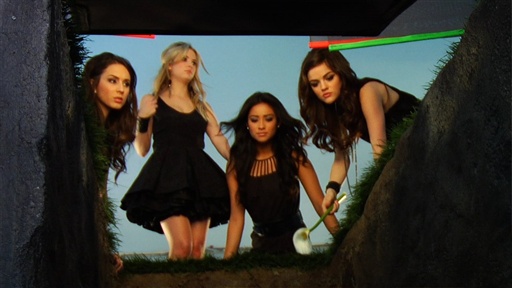 Last week we saw the return of Pretty Little Liars after a wonderful finale that saw the death of Emily’s girlfriend Maya and revelation of Mona as A.

This week’s episode we saw Emily having yet again another breakdown, now don't get me wrong I totally understand being upset about Mya’s death, but boy has she been extra annoying these past two episodes. Anyway, Emily notices a necklace in her bag that says “Dead Girls Can’t Smile” and is adorned with teeth and the everyday insanity that is their lives starts. A debate about what to do with the necklace lands it in the toilet. How can four girls fit into one non-handicap stall? Amazing!!!!  As you probably have guessed due to a highly sensitive toilet sensor the necklace is flushed after the ringing of the school bell.

I have to ask myself after the first 10 min. of the episode why am I still watching “Pretty Little Liars” ?  My answer, because it is a guilty pleasure and when it is good, which is about 85% of the times it is really good.  Now back to the episode.  Soon afterwards we see the not so blind Jenna who gives Aria the best line of the night “Is it me or is she blinder than she was last year”.  This leads to the girls going back and forth about rather Jenna is faking it or not.  And as you probably have guessed the girls set a trap for Jenna and of course she takes the bait and now they know her secret.  This reveal gives  Aria the 2nd best line of the night after the girls argue about outing Jenna  “Don't look at me I'm ready to hang a sign Bitch can see”.

I know it's early in the season and my complaints and disappointments may be a little premature, but I kind of feel like I am watching the first season again. Now don't get me wrong I did not think for a moment that we were finish with A , but the nonstop text messaging  from the 1st season has started again and it is enough to make me want to run for the hills. I understand this is A way of showing how she sees all and is everywhere, but I prefer the intimidation by action more so than text messaging.