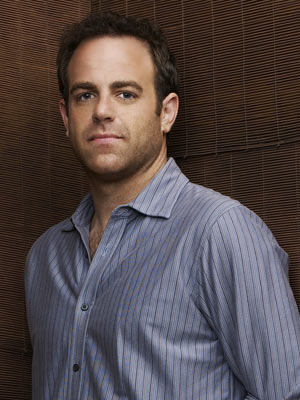 When we last saw Violet (Amy Brenneman), she was being chopped up by her psycho patient, who wanted to steal her baby. The beginning of the premiere kicks off seconds later and — spoiler alert — Violet lives.

How does the attack affect the members of the Oceanside Wellness Center, which was also left in pieces? Paul Adelstein reveals the aftermath of that fateful night and also talks about the baby daddy, new relationships and another possible Grey's Anatomy crossover.

TVGuide.com: Cooper has always been there for Violet, but will she let him be so close after what happens in the season premiere?

Paul Adelstein: She certainly has some emotional and psychological obstacles to get over before she can let anybody in. Those around her, including Cooper, have some as well. Cooper has some serious guilt about being so close and not being able to help her. His reaction to that is interesting. It takes some work for him to be able to comfort her, and vice versa, for her to receive comfort from anybody.

TVGuide.com: How does everyone deal with what happened to Violet?

Adelstein: A lot of the narrative is driven by Violet's attack and the aftermath, and that has to do with all of the relationships in the practice really. [There's] a lot of stress on everybody. There's the whole baby issue and taking care of the baby and who the father is. Violet had chosen Pete [Tim Daly] at the end of last season and I think he fully expects to be the principal person in her life, but she might not be capable of that kind of attention.

TVGuide.com: Will we actually find out who the baby daddy is?

Adelstein: Yes, we do find out. She's completely incapacitated, so somebody has to [take care of the baby], and that becomes a little bit of a conflict as well.

TVGuide.com: What will we see for Cooper and Charlotte's relationship?

Adelstein: What happens to Violet is a wakeup call to Cooper in terms of growing up and moving forward with his life. He wants Charlotte [KaDee Strickland] to be a part of that.

TVGuide.com: Cooper has a very full plate this season. How does he handle that?

Adelstein: He does have a lot on his plate and that really throws a wrench into the works. Things happen in the practice that force him to step up a bit. Later in the season, there's some things that happened last season that come back around that Cooper has to deal with. A couple of medical cases that he made some — they were the right decisions, but a lot of the doctors have grey areas in terms of medical ethics, they're probably doing the right thing, but legally they may have crossed some boundaries, and that will come back to haunt some of us.

TVGuide.com: Are the words "medical malpractice" thrown around?

Adelstein: Those words may be used.

TVGuide.com: We know that Chandra Wilson, who plays Bailey on Grey's Anatomy, is crossing over. Is there a chance for more crossovers with Grey's?

Adelstein: I think there are. I'm not 100 percent sure of that, but I caught wind that there may be somewhere down the line this season.

TVGuide.com: What does Bailey do when she crosses over?

Adelstein: There's a medical case that brings her, but since she has a personal relationship with Addison [Kate Walsh], obviously, there's some personal stuff that ends up happening, too. In classic Bailey fashion, she's not shy about weighing in about the various dysfunctions that she sees around her, which are both hilarious and brutal. There is also some medical stuff where she has to get our doctors involved, too.
Posted by MISS TV GIRL at Wednesday, September 30, 2009